This site uses cookies to enhance your browsing experience.

The Future of 8 Ball Pool 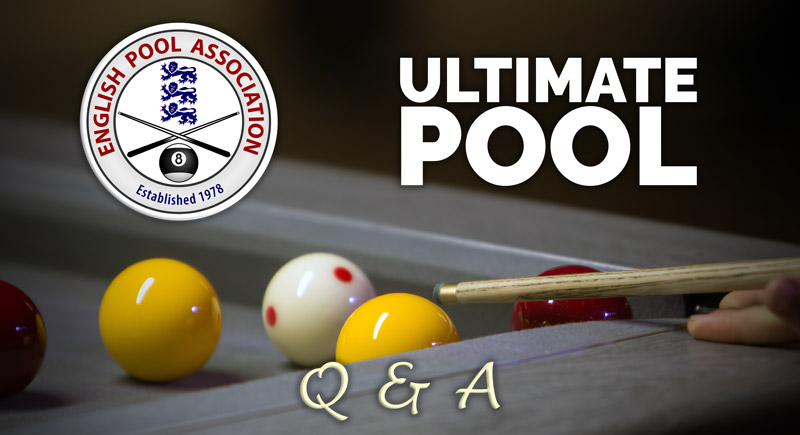 With the Collaboration Agreement between the English Pool Association and Ultimate Pool Group reaching the final stages it is envisaged that this September will see the launch of a brand-new era in the entire structure of 8 Ball pool in England. The future has never been brighter nor offered more opportunities to pool players at every level, from beginners young and old right through to our professionals. By Ultimate Pool being the professional side of our sport there is a clear path for everyone to know how to achieve their goal of one day winning major trophies playing in front of a televised audience.

The information below will help you to understand what will happen at all levels so if you are a player (at any standard), league organiser or county official please read on.

Affiliated leagues starting from September will need all players to individually register to the English Pool Association via the new Ultimate Pool App which will be launched in the next week (EPA registration facility will be available from the 4th week of August). The cost will be £6 per player at this point, current EPA members should please see further information below.

What if I do not have a smart phone?

The captain of each team can be given authority to register team members in this position.

What happens if I do not pay/sign up to the app?

I already have an EPA membership; do I still have to sign up in September?

All players in affiliated leagues must sign up to the app. If you are an Interleague or a county player whose EPA membership would have expired in December, then the difference in fee must be paid in January.

For example, you should pay £6 when your league starts then in January if you are playing county pool you upgrade your membership via the app and pay the difference of £7.50 to make your £13.50 fee.

It will continue like this each year until the 2-year grace period of this new agreement has passed then we will move to put this into one payment per person.

What happens next September? Do I pay £6 again and then make this up to £13.50 in January (i.e., two payments every year) Similarly for Interleague players - when do they pay the balance required? How is this managed?

Yes, you will pay in two payments until the 2-year grace period has passed. Interleague players will have to register as normal before they play, reminders will be implemented via the app that a balance is due if you are either a county or interleague player.

I do not care about EPA or UP and only go out once a week for a social night. Why should I pay?

With the number of pubs that have closed in recent years as well as those still open following the trend of becoming a gastro pub we are losing more and more pub teams. By investing in grass roots and keeping the numbers playing this will encourage landlords to keep the pool tables and the business they bring. You would be helping and ensuring that the next generation of pool players who 'only go out once a week for a social night' will have somewhere to play other than a pool hall. If it's a financial issue please be mindful that there is a cashback system that will gain you your £6 fee back very quickly.

What difference will this make to me and league players?

EPA and Ultimate Pool are currently looking to get straight involved as a team to not only improve this years Champion of Champions event in November but also resurrect something like the Golden Cue next year. These events are attended predominantly by local leagues players and their teams so increased prize money, live streaming coverage, and even the possibility to play on tv could be on the cards moving forward.

Will I have to have an ID card?

This may be something that we will use for players who do not have a smart phone to be able to show their membership. Players who currently have an ID card will continue to use them for the near future.

Will this mean a change in what rules I play?

EPA affiliated leagues have always been allowed to choose to play any ruleset they wish, and this will not change.

How will this affect the league I run?

There will be no change as to how you choose to run your league except that all players must be a member of the EPA via the Ultimate Pool App.

How will you or I know if players are registered?

So, will I still affiliate my league to the county?

Are there any benefits to me affiliating my league?

You will receive full access to the new scoring system which you can use to generate fixtures, draws for KO events and live scoring. As well as being able to enter an interleague team and Champion of Champions. More local events are also planned which will benefit not only your players but the venues. The EPA and Ultimate Pool are also looking to work on a new national event next year in a similar vein to the Golden Cue aimed at also catering more to local league players.

Does this mean we do not control who can register for our county?

You will still be in control of every registration within your county. Your designated registrations officer would be given authority and access permissions on the app so that every county/interleague registration requested via the app must be accepted by you for it to be completed. The same as you receiving a registration form now but dealt with at a single push of a button.

Ultimate Pool are creating their own scoring software with the acceptance of Redseal which will not only replace our current systems but will be a scoring system that has a higher functionality than Cuescore. This will be available to all counties. UP are working alongside the EPA on software solutions to both complement and enhance our current systems to develop a better and more interactive end user experience to a much wider section of EPA membership than we do at present. This will include but will not be limited to local league members, the local leagues themselves, county, regional and national members or generally anyone who has an interest in the EPA.

Will the county results still go on the EPA website, or will it link to the Ultimate Pool app/website?

The county results and county player rankings will be linked to both the EPA site and the UP App.

Will there still be a county affiliation fee to the EPA?

The EPA would hope that the need for county affiliation fees will be removed.

If a county normally adds a fee to player registrations to generate their funds, what happens now? What if they lose money?

Each county could and should continue to charge the subs and fees previously collected as the EPA and UP registrations fees are simply replacing the EPA membership that was collected before. The counties will be better off after funds are redistributed back to the regions and counties so no monetary loss should occur. However, if a county finds themselves at a financial loss, they can contact the EPA and request assistance during the transition period. Advice and financial help will be available.

The EPA will receive 20% net from Ultimate Pool per membership only. EPA will also receive 20% of all merchandise or trophies purchased via the App.

The total fees are net of VAT and Apple/android fees. The EPA have had no costs to bear whatsoever for this process but totally agree with the initiatives taken by Ultimate Pool which will have a knock on effect to all players and affiliated leagues under the EPA.

It's been quoted “UP would like to be to the EPA what Matchroom is to world snooker”. Does Matchroom make its money to pay the professionals by charging all the affiliated snooker players in the country or by obtaining large sponsorship deals?

The amount made from the income of EPA members is a small drop in the ocean of the £1.3 million spent to date which is expected to rise to £3 million over the next two years. Ultimate Pool are working tirelessly to take a sport in decline and put it in the world shop window, succeeding thus far with their broadcasts now being shown in twenty-six countries and soon to be televised in America and Canada. Ultimate Pool want the EPA to grow together with them.

With respect, Matchroom can draw revenue from a sport like snooker which has traditionally been watched by millions through sponsorships, endorsements etc. English 8 Ball has been watched by no one, with average audiences of a few thousand, yet since Ultimate Pool started, they now have the most viewed pool video ever on Instagram with Gareth Potts' clip receiving seventy-seven million views.

The similarities are that Ultimate Pool have been and will help the growth of the sport and together we have a clear strategy to do so. Yes, the statement is right that Matchroom does not take membership fees but equally they do not have the same job that we have with pool.

What happens if the leagues do not affiliate? EPA rules state to play county or interleague you must play in an affiliated league.

If the information has been provided by your regional delegates correctly then this should not happen however, having the roll out in September will not have any effect on the 2022 season in terms of qualification. We will all then have time to look at the figures and see if any counties need assistance before the 2023 season starts and look to finding a solution.

Does this mean EPA will now be playing International Rules?

As per the constitution any rule changes must be voted in by the counties at an AGM. The EPA follow the same rule change laws as the WEPF meaning they can only be proposed every 5 years. The next possible proposal that can be accepted would be at the 2024 AGM and if any changes were made, they would come into effect from 2025.

It really is a question of does eight ball pool fossilise or progress? Whether this is the way to progress only time, and everybody's input and determination to make it succeed, will tell.

All players, and league officials, please speak to your county and regional officials or even use the Contact Us form if you have any further questions.

  Click to get this document as a PDF file.